Council Tax rises affect everyone directly. It’s one of those issues that act as litmus paper in terms of public opinion. It’s hurting. The rises have been enormous at 84% for the band D average – way above inflation – and it is particularly hard for people, such as pensions, on fixed incomes. Some pensioners have become so badly affected that they have been prepared to go to jail over the issue.

There are no easy answers as to alternatives but we are looking at research by Michael Lyons which is to be published soon. We are also using Parliamentary Questions to get information about the Government’s proposals and plans. For example we have discovered that householders in Northern Ireland are to be fined £1,000 if they don’t allow Council inspectors into their homes and now the Government has purchased a computer system which could allow them to do this in England and Wales as well. The Government also wants to charge people higher tax if they live in nice areas. To cap it all, we found out that the man supposed to be in charge of it all, John Prescott, hadn’t paid his own Council Tax bill.

Local government finance is complex, but for most people, local government is about levels of council tax, recycling and rubbish collections, planning, communities and social cohesion. We’ve seen a breakdown in community cohesion. There is an increase in gang culture, gun crime, racial tensions and ethnic segregation.

I’m an Essex girl and I can remember travelling on the train from my village into the City. First I’d see the pleasant landscape but as we approached the inner suburbs there was an increase in high density, tenement housing in run down areas. There is a 10 year difference in life expectancy between those people living in such areas and the leafy villages further out of town. We need to try to do something about it. We need to regenerate our inner suburbs.

To make the big changes, we need to be in Government. We have been successful locally, where we fight elections every year, and on my team, we have Eric Pickles who has actually run a council. We are in the process of producing a paper on how we will devolve more power to local authorities. This contrasts with Labour’s centralisation.

Questions & Comments from the Floor

Philippa: I’m concerned about the proposal to increase the powers of Ken Livingstone. He’s pushing for too many new homes in Stretham and is not listening to the local community.

Caroline Spelman: I think it’s important to remove individual personalities from the equation and think about the structure. The powers given to the Mayor must be acceptable to voters regardless of the individual holding the Office. Often it is important to have a strong leader to drive through change. However, what we have in London is messy – the Assembly lacks the power to scrutinise the Mayor, and local authorities lose their voice. I believe we should return housing and planning decisions to local authorities. Local councillors are better placed to make local decisions.

Richmond Councillor: Richmond is a nice place to live, but people are now building large extensions to their homes and are building on gardens.

Caroline Spelman: Labour didn’t set out to do this but it’s a consequence of not building enough affordable housing. They have designated back gardens as brownfield sites, given brownfield sites priority for planning permission, and housing density has therefore doubled. Large, leafy gardens are usually found in the most expensive areas and when this land is developed, the new homes prove to be too expensive for the people who need them. We need to identify genuine brownfield sites and to look at building affordable homes and offer more shared ownership schemes.

Nick: My local authority loses 10% of its funding because of ring-fencing. What can we do about this? I also don’t like Regional Assemblies – they are too remote.

Caroline Spelman: We will put a stop to ring-fencing so that local authorities can see more clearly what money they have for their area. They will be given discretion on how the money should be spent.

We will abolish regional assemblies. They are unelected and where voters have been asked if they’d like elected ones, the proposal has been rejected by 80%. Regional Development Agencies on the other hand have been more successful and where local business and residents want them we will keep them in place. However, we would take the R out of it so they become Development Agencies, accountable to their local authority and not to central Government.

Fiona: Should the congestion charge be extended?

Caroline Spelman: Other cities besides London are now looking at congestion charging. The trouble with it is that it penalises people who cannot afford to pay it. In London it has gone up from £5 to £8 overnight – another rise above the rate of inflation. There has been a big impact on retail businesses and now London’s tubes are overcrowded. It’s a crude method of taxing people who have few choices.

Liz: What can we do about the increase in gang culture and crime in our communities?

Caroline Spelman: The best way to police our streets is to have people using the streets. We now have a situation where people either stay indoors or, where they can, they leave. We need to redevelop areas to bring more people back in. We need to pay attention to the way we design our cities and ensure there is the right infrastructure eg enough doctors’ surgeries, schools and sports centres. Most cities have a thriving centre which quickly declines as we move out to the “doughnut ring” of areas of now redundant, urban manufacturing. These areas need to be regenerated and replaced with carefully planned, affordable homes which includes parks and gardens. A new form of “garden suburb” around town and city centres.

Susan: Isn’t the root cause of such crime the lack of stable father figures?

Caroline Spelman: You can’t pass laws to make people stay together. We do live in an era where many adults are selfish and don’t want to take responsibility. We should not stigmatise the children but should teach them about relationships. There are some good pilot schemes in schools teaching year 6 pupils communication skills and how to resolve conflict

Caroline Spelman: In most local authorities, housing priority will be given to families with children. In my area, teenage mothers are not given flats by themselves but they are offered shared accommodation with support for at least the first 18 months. We need to understand teenage pregnancy. Some girls believe having a baby is the best thing they ever did, and I know of one girl who said her own mother was more interested in her once she had the baby. Many of the teenage mothers are not interested in the “unsocialised” father – they just want their own child.

Alice: How did you get involved in politics?

Caroline Spelman: I saw the squalid conditions in the inner suburbs and wanted to do something about it. I had good life chances myself and attended a good grammar school and then university. I didn’t join the Party there though because I found the style of politics “laddish” and off-putting to women. You need to persevere if you want to achieve in politics. It’s a long path to selection and election, and we’ve still got some way to go in countering the macho culture.

Zoe: How can I develop my skills?

Caroline Spelman: Getting involved locally and becoming a local councillor is excellent training. Also, as a teacher, you are able to speak from real experience which is invaluable.

Why the CWO and Conservative Young Women are vital to getting more women elected: By Dehenna Davison, MP. Hon President of the CYW. 22/12/2020

Dehenna Davison: We need to dig deep to understand why more women don’t go into politics – but quotas are […]

To find out more please come to our event on the 27th of November with WBG and Paul Sculley MP. […] 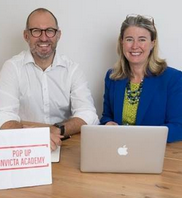 To help children catch up, we need a massive extension of quality remote teaching and learning 03/09/2020

An article by Anna Firth and Stephen James, from Conservative Home The Prime Minister is right that getting children back to school […]